When concrete shells are constructed, they usually have to be supported by elaborate timber structures. A revolutionary technique developed at the Vienna University of Technology now uses inflatable air cushions instead.

Large shell structures made of concrete or stone are hardly ever built any more. The reason is that their construction requires large, expensive supporting structures. At the Vienna University of Technology, a completely new construction method has been developed, which does not require any timber structures at all: a flat concrete slab hardens on the ground, and then an air cushion below the plate is inflated, bending the concrete and quickly forming a sustainable shell. Even large event halls could be built this way. In Vienna, a first experimental structure has now been built using the new method.

“It is similar to an orange peel, which is regularly cut and then flattened out on the table”, says Professor Johann Kollegger. “We do it the other way around, starting with a flat surface and then bending it to a shell.” Johann Kollegger and Benjamin Kromoser (TU Vienna) have developed the new construction technique, which has now been successfully tested on the Aspang Grounds in Vienna.

The Pneumatic Wedge Method
At first, a flat slab is created using standard concrete. It is crucial to get the geometric shape exactly right. The slab consists of several segments. Wedge-shaped spaces are left between these segments, so that the segments fit together perfectly when the structure is bent.

Once the slab is hardened, an air cushion below is inflated. The cushion consists of two plastic sheets welded together. At the same time, a steel cable is tightened around the concrete segments, so that the concrete is lifted up at the center and pushed together from outside. To ensure that all the concrete segments move in perfect synchronicity, they are connected with metal beams. In the experiment, the whole process was finished after about two hours, the final height of the concrete structure was 2.90m.

When the concrete is bent, many tiny cracks appear – but this is not a problem for the stability of the shell. “We can see that in old stone arches”, says Johann Kollegger. “If the shape is right, each stone holds the others in place and the construction is stable.” In the end, the structure can be plastered, then it has just the same properties and is just as stable as a concrete shell constructed in a conventional way.

Creative Freedom for Architecture
“We decided not just to create a simple, rotationally symmetric shape”, says Benjamin Kromoser. “Our building is a bit drawn-out, it cannot be described in simple geometric terms. We wanted to show that using our technology, even complex free-form structures can be created.” Such playful free-form shells play an important role in contemporary architecture. By carefully designing the shape of the concrete slab and the air cushion, a wide variety of shapes can be built using the pneumatic wedge method.

“Building shells with a diameter of 50 meters is no problem with this technique”, says Johann Kollegger. The hardest challenge is creating complicated shapes with a very small radius of curvature. In the labs at TU Vienna, different kinds of reinforcement were tested to see how strongly they can be bent – a radius of curvature of just three meters is feasible.

As the new construction method renders timber structures obsolete, it not only helps to save time and resources, it also saves a lot of money. Benjamin Kromoser estimates that about half of the construction cost can be saved – even more in large structures.

and financed by the Austrian Research Promotion Agency (FFG) as well as the following industrial partners: 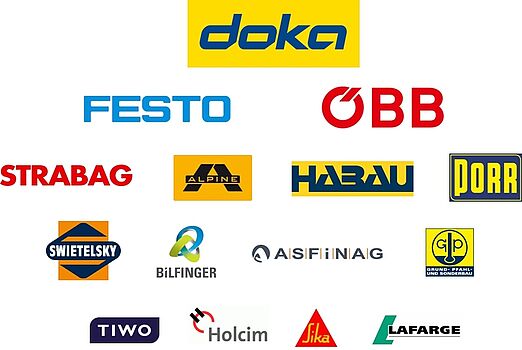